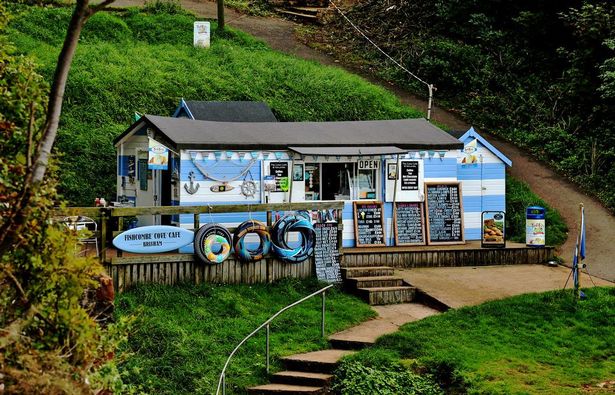 A small cafe in Brixham has won best cafe of the year award in the Devon Tourism Awards for pandemic stricken 2020.

Fishcombe Cove Cafe is a small venue which has become a hub for the local community, which owner Chloe Pavely says has been ‘wonderful’ during the pandemic.

It’s been a difficult year for many establishments, especially hospitality who have had to close and re-open constantly throughout the year.

Chloe told DevonLive that they usually open in March which is when England went into its first lockdown and although cafes, restaurants and bars were allowed to open for takeaway only, they made the decision to stay closed until June.

She said: “I know a lot of other business adapted and opened as a takeaway but I just didn’t feel at the time it was in the communities best interest.

“We were lucky with the beautiful weather and if we opened up we are encouraging people to come to the beach which is fairly small.

The government didn’t put in a strict structure then so I personally decided not to open to make sure it was safer for my staff and the community, you have to do the best thing for everyone, not just my business.”

Fishcombe Cove Cafe has been open for three years and has become popular with the locals and are planning on re-opening again in time for Easter.

Speaking about how coronavirus affected them, Chloe informed us that it was a struggle and the team had to go back to the drawing board.

She continued: “We wanted to do something new and adapt but still create a sense of normality for people so on Friday’s we had burger night’s with a vegan option too. Instead of people having to pre-order or book they could come down as and when they wanted and there was a lot of space so people could be safe.

“For me and my sister if we wanted to go for a meal we’d be like ‘oh we can’t book anywhere’ so for us we wanted to do the opposite and say just pop down between these hours and you know it will be covid safe as it’s outside with enough space for the 2m rule and you could just enjoy your burgers by the cove.”

Chloe informed DevonLive that Fishcombe Cove Cafe will be open again as a takeaway just in time for Easter with a limited menu available. On winning the award she stated that it’s come as a big shock.