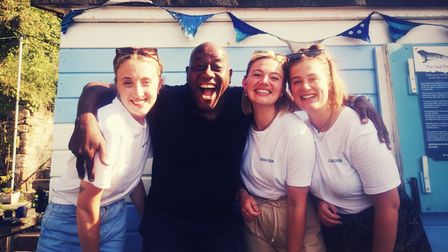 Woah, what a couple of weeks we have just had at the cove!

News travels fast, plus I’ve not been quiet about it on social media either, so you may already know what I am going to be writing about in this week’s article but for those who don’t, we had a very busy day of filming last Wednesday.

Not just any filming, but filming with famous chef and TV personality Ainsley Harriott.

Turns out ITV are showing a programme called Good Mood Food, which has been so popular, they decided to run it for a second series.

The production company Rock Oyster Productions chose local areas for the programme, and as a result they chose little Fishcombe Cove Café to film myself and Ainsley making a Brixham Crab Bread Bowl.

The day started with clear blue skies and the hot sun beating down on Brixham.

I went down to the fish market on the harbour to meet the crew where Jon, from the Bay Coffee Company, provided the team with delicious cakes and coffees as we sat and discussed the events and itinerary for the afternoon.

The cameramen went off to capture Brixham in all its mighty with the bright-coloured houses and the hustle and bustle of our lovely little fishing town.

Ainsley went along, too, which gave everyone a chance to say hello and have their photos taken with him along the harbourside.

Once the harbour was filled with the high tide, Tristan of Adela BM79 was able to moor up next to the steps at the fish market with two massive crabs and a beautiful fresh lobster.

We were shown around Tristan’s boat where a bit of filming took place, mainly of us trying to jump onboard – nothing like trying to look graceful on TV while the camera filming you haul yourself aboard.

And before we knew it, we were being waved off by everyone on the waterfront.

Tristan fired up the engine and away we went via boat cruising our way over to Fishcombe Cove.

The weather couldn’t have been more glorious!

Being able to see the coastline from the water gave me a whole new perspective on how lucky we are to live here – typical that I say that in every column I write, but it’s true.

After filming the shots the cameramen needed of the Bay looking like somewhere abroad, and having spent the last hour chatting away to Ainsley on camera, we arrived at Fishcombe Cove before hopping onto Tristan’s other boat, Kyla C so we could get on to the cove safely – with the crabs, of course!

I was lucky enough to have my absolute dream team, Rosie, Emilia and Liz at the café that day, holding down the fort and ensuring everyone had their cold drinks and food to enjoy.

The crew had already arrived and were tucking into ice creams on the decking as we ventured our way on to the cove.

After introducing Ainsley to the team, it was time to cook the crab, top tip: make sure your water is as salty as the sea (cheers Ainsley).

It was rather odd having cameras set up for filming in the little beach hut café, certainly made it funny when it came to serving a customer.

While the crab was cooking and the crew were enjoying a well-deserved sit down, Ainsley saw the opportunity to go on to the cove and meet everyone.

Photos were taken, conversations were had and smiles were beaming across the beach.

The last part of the day became the focus point as we had our fresh crab ready alongside our bread bowls with all the ingredients on a tray ready to whip up our famous crab bread bowl.

From our homemade coveslaw (see what I did there), to the fresh garden salad, the seeds and even the Brixham Maid Fishtown seasoning (the not-so-secret ingredient that gives any fish dish a special taste), it was all there ready to be prepared.

At this point I didn’t quite realise it would be me showing and describing each step to Ainsley while he watched me create the speciality as the cameramen filmed, then, once it was all finished, it was Ainsley’s turn to taste the final product – thank goodness he liked it (imagine how awkward it would’ve been).

Once the filming had finished and the crew had the shots they wanted, it was time for them to leave, not before we had our team photo with Ainsley.

One last thank you to the crew and off they went back to their hotel ready for their next day of filming in Ilfracombe.

It was hard to decide what to do after they left, so we wrapped up the café and decided to celebrate with a refreshing dip in the sea – which was much needed after being in the sunshine all day – followed by a lovely barbecue, accompanied by a beer or two.

It was the perfect end to such an exciting and wonderful day.

The programme is currently on ITV, and the new series will be aired in April 2022.